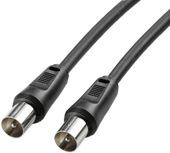 Note: According to the current specifications of USB.org we have adapted the technical data of our USB 3.x products.

USB 3.2 Gen 1 is former known as USB 3.0 - both are identical based on their wires and protocols and have a data transmission rate of up to 5 Gb/s. USB 3.0 has been reintroduced as 3.2 Gen 1 together with a new connector, the Type C. USB 3.2 Gen 1 is available for the USB connectors A, B, C and Micro A/B.

USB 3.2 Gen 2 is limited to the USB Type C connector only. It offers even more than USB 3.2 Gen 1, such as data transmission rates of up to 10 Gb/s and the full PD potential with up to 100 W (20 V 5 A) - those cables are also called „Full-Featured“ and are the state of the art, when it comes to USB Performance. Both, USB 3.2 Gen 1 and USB 3.2 Gen 2 have identical wires and just differ from the used protocols.

In addition there is the version USB 3.2 Gen 2x2, which supports data rates of up to 20 Gbit/s thanks to the use of the Thunderbolt protocol!

Inside every computer numerous cables are used to transfer data and power between the individual components. In recent years, however only a few things has changed in cabling: Due to better airflow properties, flat ribbon cables are hardly used anymore and increasingly only round cables. These are easier to bundle and lay with professional cable management. Flat ribbon cables are only frequently used in the SATA area.

Internal connection and extension cables are available in different lengths and thicknesses, with different - mutually compatible - connectors, depending on the application. If a plug or socket does not fit, an appropriate adapter can help.

The tasks of internal cables includes for example the power supply of mainboards and hardware components of a computer system. By using extension cables of different types, the connection between ATX, SFX or TFX power supplies and the corresponding components can also be established if the existing cables, for example in the big tower, are too short. Power connections of the graphic card can be made via PCIe or the mainboard via 4-pin ATX12V, 8-pin EPS12V or 20+4-pin ATX connectors. Molex and SATA power cables, adapters and extensions are also necessary for the connection of SSDs, HDDs or sometimes even M.2 hard disks, if these are not mounted directly on the mainboard but are connected via a special internal housing - this can be the case, for example, if several M.2 data carriers are to be used via a connector in the RAID network.

In many cases data transmission takes place via an internal data cable. SSDs and HDDs as well as ODD and FDD drives are connected to the mainboard with floppy cables, IDE cables or SATA cables.

Fan and case function (e.g. LEDs or exotics such as built-in wireless charging modules) are mainly connected to the mainboard of the computer via internal cables with 3 pins, 4 pins or I/O cables with 2 pins. Other internal cables include SLI cables for connecting multiple graphics cards or internal USB connections for front USB ports.

Serial-ATA or short S-ATA / SATA is today's standard interface for connecting mass storage devices such as SSDs or HDDs. Originally, bus systems with parallel signal lines in conductors and connecting cables were used to connect these data carriers, but with increasing transmission speeds these quickly reached their limits. And so ATA was not spared from being converted to a serial transmission standard.

Nowadays mainly SATA 3G and 6G cabling is used. The maximum data transmission rate is up to 300 Mbyte/s (SATA 3G) and 600 Mbyte/s (SATA 6G). Flash-based storage media have increased the requirements for transmission speeds to such an extent that SATA 6G is also seen as an outdated technology. SATA is therefore being replaced by SATA Express (SATAe or eSATA) as the preferred interface. SATA Express is backward compatible to SATA and is designed for data transfer rates of 8 or 16 GBit/s. SATA Express is the preferred interface for SATA. SATAe uses the PCIe 3.0 protocol for transmission.

Show all (15)
We use cookies to ensure you the best possible service in our eShop. More information about cookies.